If you've invested in crypto, you've probably heard of the concept of staking. Staking is a process in which token holders ‘loan out’ their crypto assets to a blockchain to secure the network and in return, earn interest on their assets. .

How exactly does staking work?

At a technical level,  PoS is a consensus mechanism that helps keep the blockchain secure and validated. The concept allows the owners of a cryptocurrency to stake their tokens and create their validator nodes. Validator nodes verify and validate transactions on the blockchain to protect the network’s sanctity. In return for their service, validators earn a portion of the transaction fee in the currency that is staked.

What can I do if I have a lot of tokens?.... Staking Pools

Now that you know a little about staking let's talk about what you can do if you have a lot of tokens. Token holders can maximize their rewards through participating in staking pools. A staking pool can be understood as a pool that combines the various computational resources of multiple stakeholders, increasing their chance of being rewarded. Through uniting together, the pool will have a higher chance of verifying and validating new blocks, which allows them to have a higher probability to earn block rewards.

The idea of staking pools is similar to traditional mining pools used in Proof-of-Work (PoW). PoW is a consensus algorithm that is used in Bitcoin. The process requires miners to work together and validate/verify transactions. Staking pools take this idea to blockchains that utilize the PoS model.

Who manages the Staking Pools?

The staking pools are often managed by a pool operator and stakeholders who joined the pool, with their tokens locked in a specific blockchain address or wallet. Some pools might require the participants to stake their coins with another third party, however, there are also alternatives in which stakeholders can contribute staking power through their wallets.

Introducing the Only1 Creator Staking Pool!

Only1 has our own staking pool for our creators! Each creator onboarded will have their own staking pool, which will produce $LIKE tokens for stakers. Depending on a creator's activity on the platform, the APY will adjust and be optimized for maximum social engagement. The APYs for each pool will be adjusted depending on the following factors: daily log-in, posting content, DM responses, Fan Engagement, and NFT Minting. The staking pools are also open for users to stake and earn rewards! The Only1 Creator Staking Pool makes it possible for users to stake their tokens and support their favorite Creators.

Tell me more about the Staking Pool Program:

The Only1 Staking Pool program will provide an on-chain mechanism for a group of stakers to share rewards proportionately amongst a staking pool, govern on-chain protocols with stake weighted voting, and stake and earn locked tokens.

How do you get started?

Disclaimer: This article does not serve as financial advice.

Chapter 1: What is Only1? Chapter 2: Create-to-Earn: The more active you are, the more you earn! Chapter 3: NFT Gated Access: Share exclusive content to your audience Chapter 4: Wallet-to-Wallet, 1-to-1 Direct chats without Intermediaries Chapter 5: One stop shop where creators and users can sell and purchase NFTs 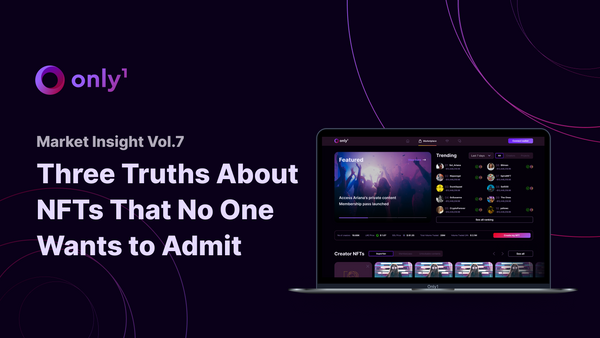 The internet was supposed to be a level playing field where anyone could share their content and make a name for themselves. But in reality, the biggest and most significant social platforms have become dominated by a few large corporations, who reap the majority of the benefits. The current state

In the past years, blockchain technology has brought us not only cryptocurrencies but also non-fungible tokens, or NFTs. The hype around NFTs took off in 2021 with sales volume hitting $25 billion [https://www.reuters.com/markets/europe/nft-sales-hit-25-billion-2021-growth-shows-signs-slowing-2022-01-10/] . Its craze continues to shoot up with no sign of slowing